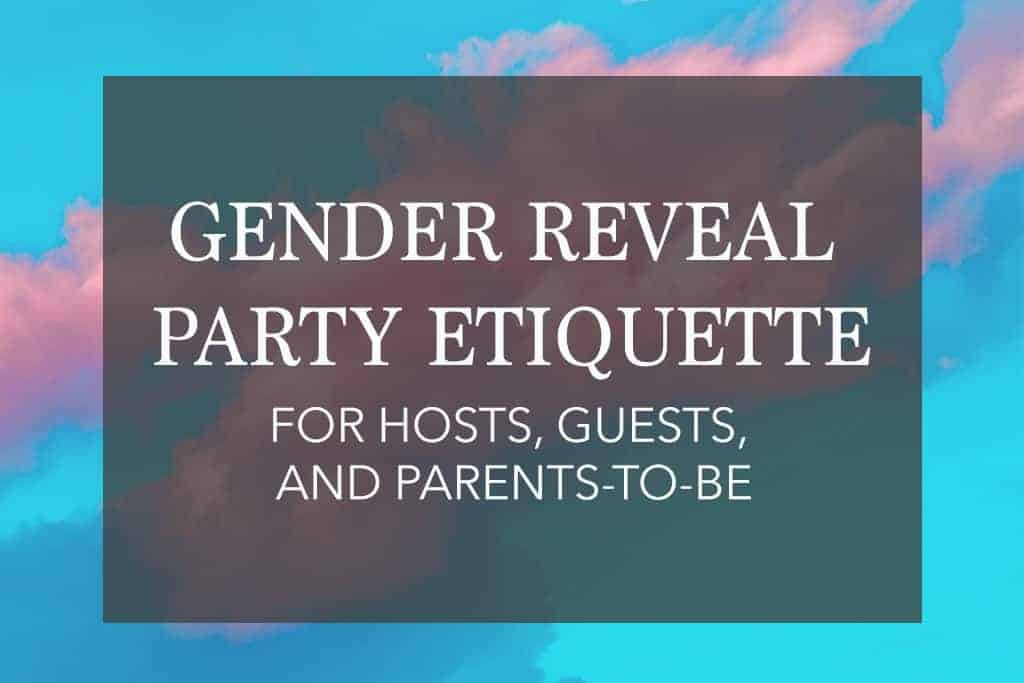 Gender reveal parties first arrived in 2008 and have been increasingly popular in the last decade. Mothers and couples use this get together to let everyone know if they are expecting a boy or a girl. Although they are relatively new, there is still some unspoken gender reveal party etiquette that you should follow!

The baby’s Gender is revealed in a variety of ways – with sweet treats like cupcakes or cake, with paintball guns or smoke bombs, with balloons or pinatas, and much more. Gender reveal parties are a fun and creative way to reveal to all your family and friends the sex of your baby.

What is a Gender Reveal Party?

The idea of the gender reveal party was inadvertently introduced by blogger Jenna Karvunidis in July of 2008. She wrote a blog about having a party during which she revealed the sex of her baby. It was then shared by Thebump.com and the idea of gender reveal parties spread like wildfire.

A gender reveal party is a party that is held with the specific purpose of revealing an unborn baby’s gender. Typically, gender reveal parties are held in the middle of a woman’s pregnancy (after the first trimester but before the baby shower) and use the colors pink and blue to denote girl or boy, respectively. The most common way of announcing gender is cutting into a cake that is pink or blue.

Who Hosts the Party and Pays?

Gender reveal parties can be hosted by anyone – the parents, grandparents, best friend – as long as the gender of the baby is kept secret throughout the planning process. In fact, gender reveal parties can have multiple hosts. The cost can be covered by the person or persons planning the event, or it can be a shared expense among a group of planners.

Who Knows the Gender?

When planning a gender reveal party, you should first decide who is going to know the gender of the baby beforehand.

There are a few different ways that the gender reveal part works:

The chosen way that the gender is being revealed tends to affect who plans the gender reveal party the most. For instance, if only the parents know the gender, then they are the only ones who can order what is needed to the big reveal. In cases where no one knows the gender until it is revealed, the parents ask the doctor to put the gender into an envelope, and they bring that envelope to whatever business will be preparing the reveal item or items.

Who Should You Invite?

The next thing you have to tackle is the guest list – knowing the expected size of the party helps to make sure that there is enough food, drinks, etc. for everyone.

If the hosts are the parents, making the guest list is rather easy. Make sure to invite anyone that you know will want to share in your gender reveal joy – family and close friends and coworkers. If the host or hosts are not the parents, be sure to consult with the parents in order to get the names and addresses of people they want to invite.

Once the person in charge of the reveal has been chosen and the guest list has started to grow, it is time to address the rest of the party planning elements: the venue, the theme, the gender reveal moment, the decorations, the games, and the food and drinks.

Where To Have The Party?

Gender reveal parties are usually dressy casual – think “Sunday Best” – and can be held in many places. Some gender reveals are set in the home or backyard of the expectant couple. Other times you can book a restaurant for a small to medium size party or an event venue for a larger party. If the gender reveal party is being planned during a time of year with beautiful weather, it can even be held at a park, lakeside, or other outside venue.

Next, you have to decide on a theme. Normally, gender reveal party themes will pit one gender against the other in friendly competition. “Bows or Bowties,” “Pirates or Mermaids,” and “Mustaches or Lipsticks” are some popular themes. Some gender reveal parties don’t really have a dominant theme and just rely on the “Pink or Blue” distinction to reveal the gender.

The gender reveal moment, the decorations, and the games are all determined by the theme that is chosen for the gender reveal party. For instance, if the theme is “Bows or Bowties,” you can decorate with bows and bowties, have a bow-tying contest, play Pin the Bow on the Baby Boy, and have the gender be revealed by an actual bow or bowtie presented to the parents.

What Should You Serve for Food and Drinks?

Food and drinks are an important part of any party. The fun part of the food and drinks that are served at a gender reveal party is all the creativity that goes into making the foods pink and blue.

Some amazing foods to serve at your gender reveal party include:

Some fun drinks and ways to serve drinks at your gender reveal party include:

Is It Okay To Serve Alcohol?

Do You Play Games At A Gender Reveal Party?

Games are another fun part of gender reveal parties. They are not required but guessing the gender is exciting for all the guests. There are many games that you can choose from to entertain your guests.

Some gender reveal party games are:

When Should You Send Out Invitations?

Don’t forget to send the invitations out in time for everyone to be able to plan to attend! You should send invites at least a month before the party date.

There are no rules on whether you send paper invitations or online invitations; it’s completely up to you. Just be sure to include all the information the party-goers need in the invitation – date, time, location, RSVP details, if they should wear pink or blue or dress for a theme, if they should bring a plate of food, etc.

Do You Bring A Gift?

Sometimes, people are not sure if they should bring a gift to a gender reveal party. Gifts are not necessary for gender reveals. Baby showers are the gift-centered parties for mothers-to-be. However, if you would like to bring a gift, that is entirely up to you. There is no rule against it.

What should you wear?

Should you dress for a theme? Wear pink or blue? Fancy? Casual? – This question should always be answered on the invitation. Most often, guests are asked to dress in pink or blue to reflect what they think the gender reveal will be.

There are plenty of gender reveal themes to choose from. Whether you are looking for something simple or want a theme that is a bit more personal, these are just a few of the more popular ones!

“He or She” – A Mustache and Lips Theme

“Buck or Doe” – A Hunting Theme

“Prince or Princess” – A Royalty Theme

Since gender reveal parties have been around for over a decade, there have been many creative ways invented to find out if you are having a boy or a girl!

Make a volcano out of plaster, papier mache, or even clay. Prepare the volcano with two tablespoons of baking soda, one tablespoon of dish soap, and five drop of pink or blue food coloring. Once everyone is around to see the big reveal, add an ounce of vinegar to the volcano mixture and it will erupt in pink or blue – revealing the gender of your baby!

Reveal it With Bubbles – and Kids!

Let your older kids and other kids at the gender reveal party reveal the gender by giving them blue or pink gum to chew. Have them blow bubbles at the same time that will tell the gender of your baby.

Let Your Dog Reveal the Gender

Get a shirt made for your dog that says, “Rub my belly to find out the gender.” When they roll over it will say “It’s a boy!” or “It’s a girl!” When guests rub your pup’s belly, they will find out what the baby will be. This can be done with cats, as well – and it is a great idea for parents who were animal parents first!

Buy sparklers that light up pink or blue and have all your guests gather in your backyard when it gets dark. Light the sparklers together and reveal the gender! You can even use your sparkler to spell out GIRL or BOY in the air!

Use Paint to Tell the Gender

You can use paint brushes and rollers or paintball guns with blue and pink paint. The parents should wear white shirts so they can paint each other. If paintball guns are up your alley, aim at a target with the blue or pink color to reveal the gender.

Use cake, cupcakes, or cake pops to reveal your baby’s gender! There are a couple of ways you can do this:

Cupcakes can have pink or blue icing placed in the middle of them for a surprise bite the reveals the gender. Cake pops can be made in pink and blue and dipped in whatever color you want to match your theme.

Reveal it With a Pinata

Find a pinata that matches your theme or purchase a generic one. Fill it with blue or pink candy or confetti. Watch the surprise on everyone’s faces when you smash the pinata open and reveal the gender!

Purchase party poppers that have blue or pink confetti and get all of the guests in on revealing the gender! Also, you may want to have a few cameras on a tripod to capture everyone’s reaction.

Use Smoke Bombs or Bonfires

You can order smoke bombs that release blue or pink smoke to reveal the gender. There is also a flame color-changing chemical that can be used to turn the flames of a bonfire pink or blue!

For football fans, there is an amazing way to reveal their baby’s gender. Purchase a football and fill it with pink or blue dust. Then have someone kick it to see if it’s a boy or girl!

Other Ways to Reveal Gender

Sometimes, family lives far away and cannot get together for a gender reveal. Luckily, technology allows you to share your gender reveal live in real time on social media. However, if you’d like to send a keepsake to your long-distance relatives in order to give them something concrete to remember the moment by, there are some great ideas for gender reveal keepsakes!

Some ways that you can reveal the gender of your baby to your long-distance relatives are:

Gender reveal parties are incredibly fun ways to share the gender of your baby with the world. There are endless ways to make your gender reveal party unique to you and your baby – you don’t even have to use the colors pink and blue! Take these ideas and run with them. Finding out baby’s gender only happens once, so you want to make sure your party is exactly how you want it!

Husband & Wife || Pregnant + Due August 2020 Sharing our journey through Pregnancy!

Did you know that breastfeeding mamas need even more extra calories than they did during pregnancy? Keeping your body nourished while breastfeeding can be a challenge with extra nutritional...

Choosing a godfather for your child is an important decision that will impact your child for the rest of their life. A godfather is someone who will watch over your child as a mentor and father...

We are so glad you are here! Thanks for stopping by our blog. We hope that the stories, tips, and guides we share will inspire you along your journey of parenthood. :)